God has not destined us for wrath, but to obtain salvation through our Lord Jesus Christ, who died for us so that whether we are awake or asleep we might live with him."

As most of you know this past Saturday morning I was in a bad car accident that easily could have been life threatening. By the grace of God, I walked away with only some cuts and minor bruises. My attitude immediately after the wreck and still in this moment is to God be the glory!

I have been mediating on the above passage since the wreck in recognizing that I am not ultimately destined for wrath or car accidents or death, but to ultimately live with Christ. I have come to a place to realize that what God allows to happen, he allows it for a reason. God knew that the wreck was going to take place when I left the house that morning and he could have stopped it from happening. He didn't, so I know that he had a purpose in it. Yes, Satan is real and I believe that my family has been under some spiritual attacks as of recent, but even in the case of Job, he ultimately attributed everything he went through to God (Job 2:10).

Moments after the accident took place, there was much confusion as I was the only English speaker in the accident. We fumbled through what took place and I found one guy who spoke some English, who actually helped very little. And although everyone in my part of S. Asia has a cell phone, we were literally at a dead zone. Nobody had cell service, which meant for the moment I was left on my own. I have never felt so helpless in my life. But in this moment God used his purpose for his good. I recognized that I had nothing else and no one else in that moment but God himself.

Although I am thankful to be alive and my attitude remains to God be the glory, the same would be true if I were in either a worse condition or if I had lost my life in this accident. Yes, if either of those had taken place it would be more difficult for my family, but ultimately to God still be the glory! If death had been the result, it is not as if Satan would have won, but rather Phil. 3:8 would have rang true in counting everything as loss because of the surpassing worth of knowing Christ.

At this point I am excited to use this accident as a testimony to Christ being in all things. As Christians we are never anywhere by accident, but it has been orchestrated by God. There were many spectators at the accident who made comments such as, "The driver of this vehicle must be in bad shape or even dead." Those same people were amazed when learning that they were standing right next to the driver. Even with the language barrier this gave me a great opportunity to bear witness to Jesus alone as the one receiving the glory and showing that it was not some form or luck or anything else that I was in the shape that I was in; but rather it was to God be the glory!

Below are a few pictures from the accident: 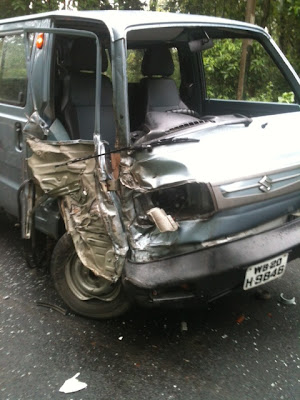 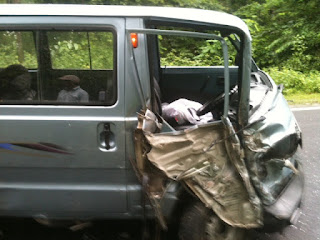 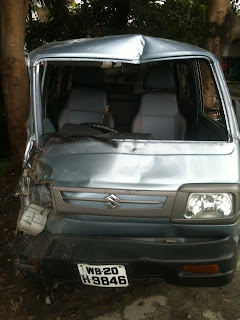 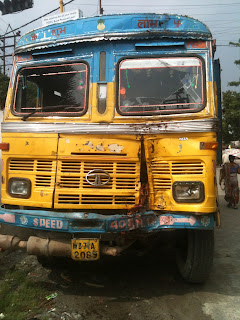 The truck I collided with.
Posted by Matthew Boyd at 6:30 AM