The Graveyard of Missions

"Therefore, brothers, in all our distress and persecution we were encouraged about you because of your faith."
-1 Thessalonians 3:7 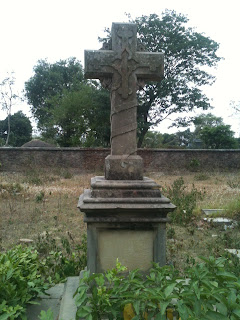 In the last three months I have started traveling to my focus area here in S. Asia, to an area that has historical been called, "The Graveyard of Missions." I have been told two reasons for this name. First, it is an area that for years missionaries would go and minister, but nothing would happen, so they would get discouraged and leave. Second, because missionaries would go to this area and be killed for their faith in Jesus.

To my knowledge it has been many many years since anyone has been outright killed for their faith in Jesus, but the idea of the graveyard of missions became a reality recently when in my focus district I was taken to a literal graveyard of which half of it is made up of missionaries who came to proclaim the gospel and were killed in doing so. Walking through this graveyard put some reality to all the stories that I have heard as I walked around looking at the names of different people killed for their faith.

These graves also served as a reminder that although these people were killed for their faith that they did not die in vain. They died for the only cause worthy of death in spreading the gospel to those that had never heard. It is really on the shoulders of people like these that I come to an area like this and am able to minister. It is because of their hard work, labor, and death that have helped pave the way for people like me to come in and see a movement started.

I was also starkly reminded that all of the people around me, myself included, we are all headed to the grave. But most of those in my context have no hope in entering the grave because they have never even heard of Jesus, much less about his life, death, and resurrection. This is the sad reality in which I currently live in and daily face; but I have hope that this atmosphere is changing as I sense the Holy Spirit is on the move in this place and soon this will be a place known for sending out church planters all over S. Asia and the globe in order to see the Kingdom advanced.
Posted by Matthew Boyd at 6:18 AM