Matt Papa, This Changes Everything 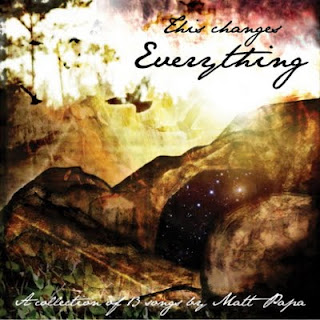 Authentic indie rock music that is gospel-centered is hard for one to find. Often what is found instead is an attempt to be like another band or to fit into a stereotype of "Christian" bands that are only almost as good as "secular" music, but not quite. But then there is Matt Papa, an artist who possess this authenticity that is displayed through a thirteen song collection that makes his third full length album This Changes Everything.
The moment that I started to play the album, it was not only music that I enjoyed rocking out to, but it put me in a state of worship of the Savior Jesus Christ. I mean how could it not with tracks such as, "Our Sovereign God", "Jesus is Lord", and "The Glory of God." Overall the music itself is difficult to put into a neat and tidy category as it ranges from soft melodies to heavy beats, perhaps the best description would just be rock. This album even features a little surprise rap/hip hop with guest artist Shai Linne on the song, "The Lord Is a Warrior."
Unlike many other Christian acts out there today, Matt Papa doesn't short us on songwriting creativity and theologically rich lyrics that are Christ centered. All of the songs are rich with gospel proclamation, standing as short sermons within themselves. The third song on the album, "It is Finished", that released as a single earlier this year is a prime example of this with lyrics such as: The earth shook and trembled, the sun bowed it's head. The veil of the temple was opened for man as Jesus went down in the cold of the grave, defeated the darkness when He overcame. The keys of the kingdom were placed into hands, of children and priests and of fishers of men. Through all generations His voice will be heard, creation resounds the victorious words.... IT IS FINISHED...'
Matt Papa explains the name behind the album by saying, "The heart of the album is that "This" is the reality that Jesus is alive and Jesus is Lord and that reality changes everything." The album and the title track will speak to a lot of people like myself who grew up in the Bible belt where there is a lot of proclamation of Jesus as Lord, but often times what is being lived out is practical atheism. This album reveals that if Jesus is truly alive then it should change everything in our life.
This title track was convicting and challenging to me with lyrics such as: 'Oh lord have I become a man, too scared to be a child again. Too comfortable with amazing grace, too familiar with the empty grave. 'Did i miss something, or have I begun to lie? Do i really live, like "Jesus is alive"? 'If this is true, this changes everything, If this is real, then i've got to tell the world. If He is God, then I have a choice to make, If I believe, then I must follow Him..'
I find myself liking all thirteen songs on this album more and more as I continually listened to them. My personal favorites are "It is Finished", "This Changes Everything", "The Lord Is a Warrior", and "The Glory of God." Matt Papa really sends a challenge forth to the Church with this album by revealing that for far too long we have been asking the wrong question, "Would you like to accept Jesus into your life?", when the question should be, "Has Jesus accepted you?" And if He has then your life should look differently then it did before because this truth, this reality of the gospel changes everything.
Overall, this album is my top choice for the summer as the music is marvelous, but each song points to the One who is Marvelous. There is something for everyone in this album as it is convicting and challenging, but worshipful to the core. Matt Papa has yet released another must buy album that aims to make King Jesus famous. His own prayer for the album is this, "My prayer for you is that as these songs bring you into collision with the greatest, most central reality in the universe, namely the Gospel ..." I highly recommend you purchase this album when it releases on Tuesday August 2, 2011. The best way to do so is on his website (www.mattpapa.com) or from iTunes.
Posted by Matthew Boyd at 7:00 AM