A Name should have Meaning: Elliot Clark Boyd

On wednesday March 9, 2011 @ 1:53 a.m. our family grew as we welcomed Elliot Clark into the world.  A name should have meaning so I thought I would use this post to briefly explain where the name Elliot Clark derives from and why we chose this as his name.
Elliot is a Hebrew name in origin meaning, "My God is the Lord." We wanted a name that had strong meaning so this is one reason we chose this name. And we already long for the day to hear Elliot declare God as His Lord! We also wanted to name him after missionary Jim Elliot who was killed while attempting to take the gospel to the Waodani people in Ecuador. Elliot is a strong name and he is named after a man who gave up his life for the sake of the gospel. 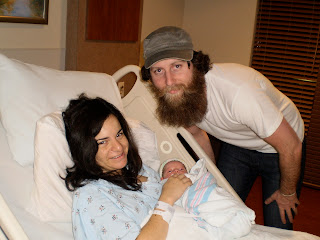 Clark is an English name in origin meaning, "Man of learning." The Clark part of his name comes from a man, Clark Rogers, who mentored/discipled me when I was a teenager. Clark took time to invest in my life, help me fall deeper in love with Jesus, and help me discern what it meant to feel a calling into ministry. In May 2009 Clark passed away of cancer, but he did not lose his battle as he went to be with Jesus. In choosing names we knew immediately that if we were to have a boy we would like to honor the memory of Clark in the name of our first son.
Elliot Clark has deep meaning both spiritual and personally for us and we are excited about the blessing God has given us in him and the opportunity to raise him in the way he should go (Prov. 22:6). We are just now beginning our journey as parents, but are looking forward to this new part of our lives and sharing Elliot with all of you.
Posted by Matthew Boyd at 11:24 AM