Yesterday I met a guy name Jared and had an interesting interaction with him. We met at Fox and Hound, where I was joining some other guys to watch Barcelona whip up on Manchester United in soccer. The game ended around 4:30 and Jared was only there for the last thirty minutes of the game. We ended up sitting there with one other mutual friend until 7:15.

Jaredd knows a lot when it comes to faith and scripture and religious stuff in general. He is like all of us, he has a story, which I was able to go into parts of. He grew up Methodist, went to a Baptist college, and has traveled a lot doing missionary work. The first question I proceed to ask him was, "Are you involved with any churches in Wilmington?" A simple yes or no would have been suffice and if yes, then the name of the church. But instead he proceeded to tell me how he does not like organized religion and went on from one thing to the next for about 30 minutes.

He is very into the Judaic aspect of religion and definitely challenges you to think. At one point he said, "I hope I am not messing with you theology at all." To my response, no, not at all, but I easily see you messing with a lot of people's theology within the church. In the end he said, "I am a Christian in the sense that I am a follower of Christ, but not in the sense of what Christianity often means today." In other words he is a follower of Christ, which makes him a Christian, but not considered a Christian in the sense of all the extra stuff that is not biblical that man has added into Christianity.

In some cases I would agree 100% with Jared. Personally, that is why I encourage people to follow the God of the Bible and nothing else. As a person identifying themselves with Christ they should model Jesus Christ from their relationship with Him and His word, the Bible. Not what any man made denomination, church, or organization tells them. In some cases I would say Jared has this under wraps, where a lot of us do not. But with that said I think it is all about what you do with something.

In many ways, I resonate with my new friend Jared, but not entirely. I agree that the church is as screwed up as it has ever been because we are mere man and that will happen. But I do not think that gives us a license to disassociate. I am involved with the church because I see it as a biblical institution set up by God and if the local church can not reach people for Christ then there is a big problem.

Anyway, I suppose my challenge to everyone is read your Bible, prayer, and daily seek out God. Work out your salvation, Phil. 2:12, and count the cost of being a follower of Christ.
Posted by Matthew Boyd at 10:12 AM 2 comments:

A little over six years ago I had the privilege of meeting a man by the name Clark Rogers. At the time he was a fairly new youth pastor at a church called The Cove, which is near Lake Norman, in North Carolina. And although I was not in Clark's youth group or a part of his church, he still took time to love and minister to me.

I was in pursuits of a mentor and felt he was best suited. He told me, "I have never mentored anyone one on one, but we will try this together." We read a book by Andy Stanley together called, "The Next Generation Leader." We met weekly to discuss the book and he helped me in discerning my call to do full time ministry. We ate together, worshiped together, and prayed together. I know he knew our time spent together meant something, but I never told him how much I really appreciated him.

It was about a year later that I moved to Wilmington, NC and Clark moved to Virginia Beach, Va. We kept in contact on and off for the first couple of years, but eventually lost contact, which seems to happens as you get older.

Roughly 6-8 months ago I learned that Clark was back in the Lake Norman area, but that he was diagnosed with cancer. I was sadden at the news and I prayed for Clark, but for some reason I always allowed time to get away from me as to never call him.

Now, about one hour ago, I learn of Clark passing away on May 4th. I am deeply saddened even though I never contacted him to tell him that I loved him and was praying for him. Even in my sadness I can rejoice because Jesus conquered death on the cross and now I rest assured because Clark Rogers is not dead, but alive and well where he is supposed to be with our heavenly Father!
Posted by Matthew Boyd at 11:11 PM No comments:

Providence, Prayer, and the will of God... 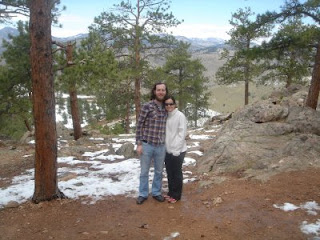 I am sitting here on my back porch as I listen to the Avett Brothers and attempting to study as I realize that it has been about one year since Andrea (my wife) and I ventured to Colorado. The purpose of the trip was to check out Denver Seminary and see if we thought that is where the Lord would want us for the next phase in life.

We loved the seminary, we loved the city...so why are we still here? I have often asked myself that question over the last year. I am now attending Southeastern Seminary, which is by far one of the best seminaries in the United States, but not initially where we thought I would be attending.

The main reason is honestly finances, I hate and love money. Life requires money, which sucks. And now I am left wondering...maybe if I had only trusted God more and had the faith to make the move to Colorado then he would provide as he has always done, in writing this I have no doubt he would have. As a side note, I am currently writing a paper for my Christian Theology class on providence and prayer.

Another thing that hit me is that Andrea and I are very different, yes one in Christ but still two different individuals. She has the spiritual gift of faith, which is amazing. I, on the other hand, feel as if this is a spiritual gift that I lack. Ironically enough I was able to talk my wife into moving to Colorado, finances were never an issue with her, and then I talked myself out of moving there.

Now, one year later we still live in Wilmington, NC, where we have been trying to escape for one year. We are still looking to move west but only two hours to Raleigh, NC, closer to Southeastern. But as I sit here and write this a big part of me just wants to be in Colorado,I can almost close my eyes and picture myself there. I honestly do not know what it is other then the west and Colorado are intriguing to me.

I guess I am writing this because I am learning about the providence of God and that he does indeed provide. I have no doubt we will get there and live one day but when...for now God knows in his providential love and care.
Posted by Matthew Boyd at 9:09 AM No comments:

Advance is going to be an incredible conference with some very talented men of God leading it. John Piper and Mark Driscoll just to name a couple of the many speakers at this conference. If you are debating on going then debate no more and buy a ticket. I consider myself quite "cheap" but even I spent the money as I see it as an investment that is well worth the cost for the resurgence of the local church. I am going to copy and paste the vision of the conference so it can speak better for itself. Go here for more info: http://www.advance09.com/

Christ promises to build the Church, and that no force will prevail against it. Yet, the local church has been heavily battered in battle. Sadly, churches in America are in steady decline, with over 4000 closing their doors and 500,000 members leaving each year--never to return. This is not what the Lord desires. The Apostle Paul tells us that " . . . through the church the manifold wisdom of God might now be made known to the rulers and authorities in the heavenly places". The local church is called to lift-up Jesus so that all the world might see Him. The local church is called to make known the Gospel and to be the vehicle of redemption for the world. Led by local churches, Advance09 is a conference committed to the resurgence of the local church for the glory of God. Our aim is to equip attendees with the Gospel so that the local church might become all that Jesus calls it to be. At this conference, we hope to ensure that on our watch and in our time we honor Jesus and see the resurgence of the local church. Advance09 is open to anyone: pastors and lay-leaders; church members and regular-attenders. We invite you to join us in this Great Cause.

My purpose in this blog is to have a place to post my thoughts on theology, church, culture and life. I am currently without any other avenue to post my thoughts out there due to my lack of interest in Xanga, Myspace, or Facebook. This blog will serve that purpose at least until I decide to jump on the bandwagon with the masses of pop culture.
Posted by Matthew Boyd at 8:35 PM No comments: